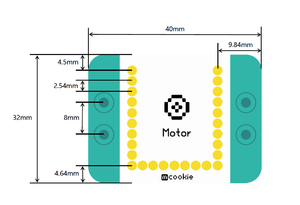 The mCookie by Microduino is a modular, stackable, building blocks compatible electronics platform which supports Arduino, Mixly, and Scratch for programming.

The series evolved from Microduino's original series with additional various improvements focus on ease of use.

Each of mCookie's components are modular and designed to connect together.

Each module has a specific function and are color coded based on functionality.

The mCookie Series modules were designed to be stack-able, magnetized, with pogo pins and building block compatibility. These features makes it a snap to assemble projects.

The mCookie Series is programmable from the Microduino IDE, which is a modified version of the Arduino IDE.

The mCookie Series is programmable with graphical visual drag-and-drop programming. Both Mixly and Scratch are supported.

New revisions to the mCookie Series occured Mid-2016. These improvements were in part from consumer feedback.