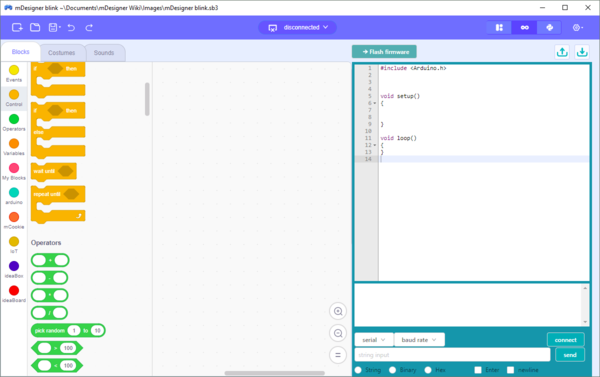 Arduino is a special mode which can be enabled in mDesigner. It acts as a drag and drop editor for programming. The Stage and Actor is disabled and many Block Categories cannot be used.
The main advantage of using Arduino Mode is that code is generated, compile, and uploaded. This means that the user can disconnect the project (hardware) from a computer and it can still work.

Arduino mode also does not supports particular blocks. Blocks which interact with the actors and stages cannot be used. Other blocks will also be incompatible. Incompatible blocks must be removed or compiling will fail.

The programming of a script (program) is outlined below.

In order to use Arduino mode it must be switched to in mDesigner.

To compile your script (program) and upload it to your Core/Core+ module. Follow the steps below.