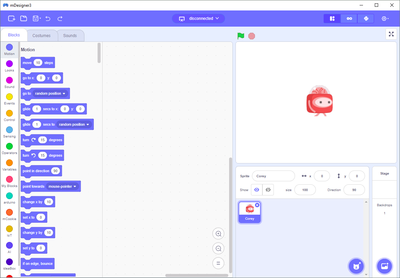 mDesigner is based on Scratch 3.0 with enhancements which allow the use of Microduino modules, sensors & trinkets in the drag-and-drop Scratch environment.

mDesigner runs on recent versions of Windows and Mac OS. The software setup guides can be found below.

mDesigner can interact with Microduino modules in two different modes. Each mode has its own pros and cons. It is recommended to use Live mode initially before exploring Arduino mode.

Live mode is regular Scratch, but with added blocks which are designed to interact with Microduino modules. This means the user has access to the stage and actor blocks. Projects (hardware) need to be connected to the computer running mDesigner. mDesigner communicates with the project (hardware), namely the Core module, in "real time" over the USB connection by sending commands for the core module to perform. This means that "Live" mode requires a constant connection with the computer running mDesigner.

Live mode also supports all of Scratch 3.0's default blocks which includes those that control the actor, stage and many more.

Arduino mode also does not supports particular blocks. Blocks which interact with the actors and stages cannot be used. Other blocks will also be incompatible.